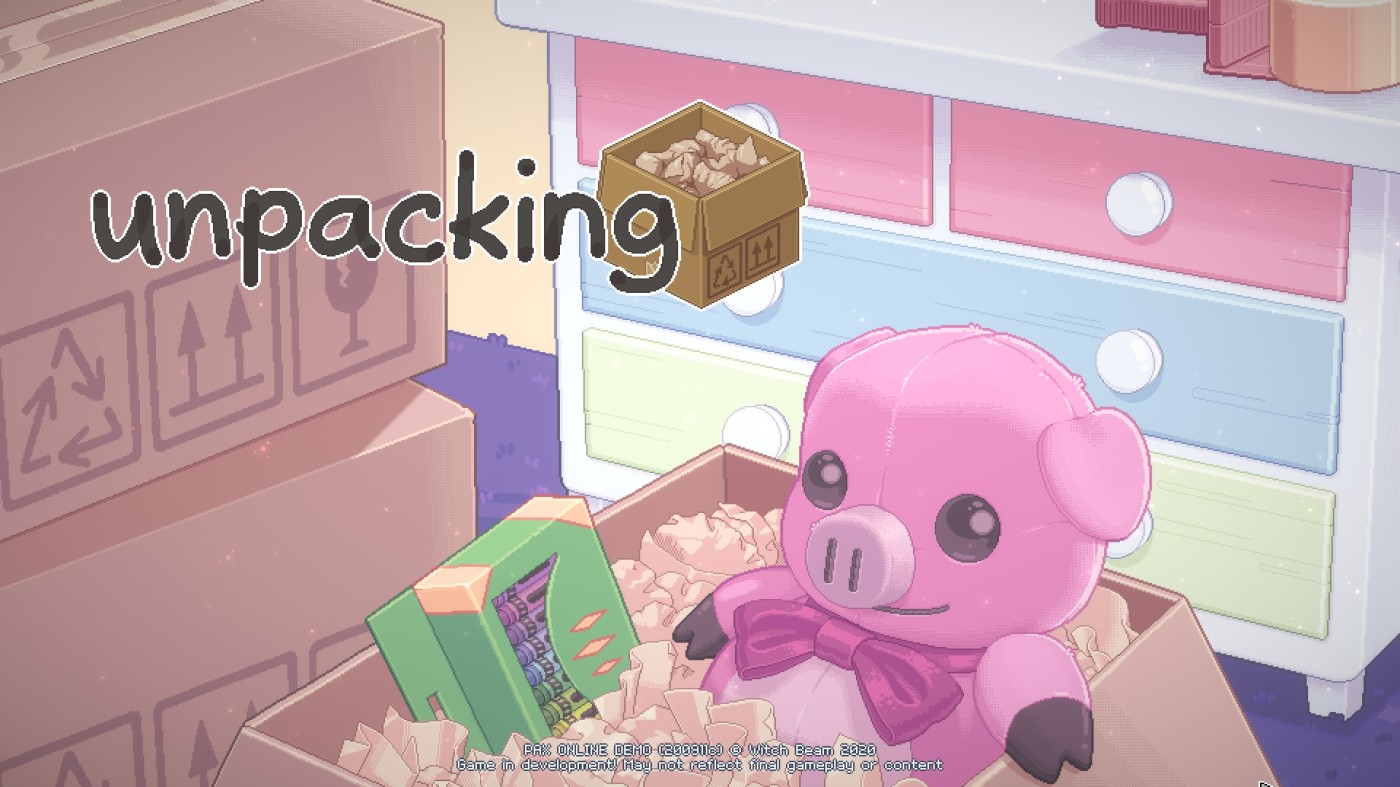 PAX Online proceeds against all odds, leveraging a three-channel streaming schedule and a startlingly complex Discord server to spin an online Expo Hall out of whole cloth. Steam is in on the fun too, dedicating a set of special pages to dozens of indie devs, publishers, and their demos. This series takes a look at some of the seriously cool games on offer.

Sometimes, wandering the halls of the expo floor, you can get to feeling like you’ve played it all before. Turn-based Final Fantasy worship? Yes. Isometric strategy in a steampunk world? Of course! Cute spin on Pokemon? A million times, each more delightful than the last.

There’s nothing wrong with games springing from the DNA of other titles, that’s how a medium grows, it’s how art works. But sometimes, if you’ve been following closely for long enough, you can get to feeling like you’ve seen it all.

I don’t think I’ve ever played anything like Witch Beam’s Unpacking.

Unpacking is a game about unpacking moving boxes, about the ephemera of daily life and the ways in which we organize our living spaces. It’s a mirror, a mood-ring, a puzzle and, secretly, a story. It’s a meditation on aging, the intimacy of a domestic space and the shifting eras of a changing life.

It’s also a video game about knowing that the toothbrush goes in a cup next to the sink, and where the DVD copy of Ghost World goes in your new apartment. About whether the bras go in the top drawer or the bottom, and where you’re going to hide the stuffed animals you haven’t had the heart to leave at home. And which ones you did.

Unpacking is from Brisbane’s Witch Beam Games, the developers of 2015’s arcade-y action title Assault Android Cactus. Gameplay unfolds in a series of small domestic rooms, spread over a series of years. The opening level of the demo is a child’s bedroom in 1997, seen from a ceiling corner: if you grew up in the 90’s you’ll recognize the colour of the walls, the bedframe, the books, games and the Lisa Frank-esque poster on the wall. Or at least you will, once you unroll it and put it up there. Later you’ll visit someone’s first apartment in 2004, filled with some of the same stuffed animals, but complete with a kitchen, washroom, and the blocky beige PC that was the trademark of every early 2000’s computer room. If you’re like me, you won’t put the iPod in a drawer – you’ll chuck it straight on the bed.

I did the same when I moved out.

I’m zooming in on these spaces because they aren’t just the setting for the gameplay, they’re the gameplay itself. In Unpacking you control an invisible inhabitant of this space, using your mouse to pull decorations, cutlery and underwear out of boxes and arrange them in your new home. How these intensely detailed spaces come together is entirely up to you. Sometimes you’ll pull out a book that looks just like one you owned in 2004, sometimes it’s a band poster you recognize, or a mismatched Doc Marten boot you chuck on the floor until you can find its mate. Each is your own to place, carefully, in its spot. You’ll know where.

While Unpacking is a puzzle game by trade, there’s no specific solution to each room. Witch Beam wants you to ponder over these items, respect them, and put them in their proper place. Where exactly that might be is going to depend on the significance you assign these things, and that’s going to change from player to player: I put the stuffed pig in a place of honour up on the bed, but will you? What about the CD player or the double-decker bus our invisible protagonist won’t discard? The dreidel?

What does this tell us about ourselves?

In the demo, we’re only given two spaces and a very limited window into our protagonist’s life. We know they’re the same person because these spaces, seven years apart, contain many of the same items: the stuffed pig, the little bus, the affinity for the arts. But Unpacking itself tells us nothing at all, only the number of years between scenes. The story, such as it is, is a complete secret. It’s left for you to discover as you pull every new item out of its cardboard box and slowly piece the minutiae of this life together. Who this person is, and how the narrative of their life progresses, is left entirely up to you and your imagination. And the stuffed pig on the bed.

Unpacking isn’t complete yet, but it fascinates me. The ephemera of domestic spaces, and the way we choose to lay those spaces out for ourselves, is a window into the soul. The specificity of the nostalgia is remarkable, it’s a powerful play.

Unpacking is fascinating, and incredibly telling about whoever’s playing it. Maybe too telling.

I can’t wait for more.