Murder Games are Back and Squid Game is Over: Now Play Danganronpa 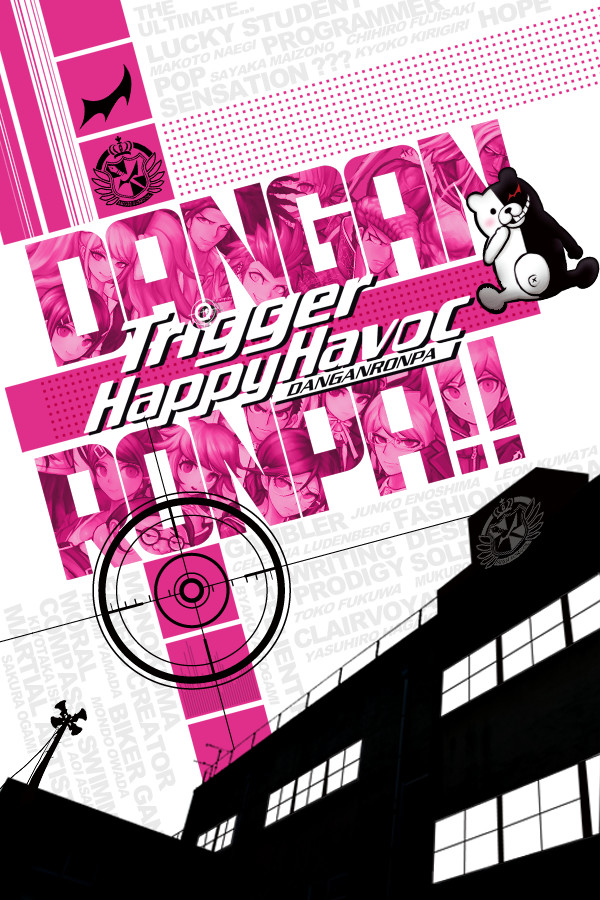 Oh hey, I’m just getting my SEO in. This article isn’t about 2021 runaway success murder-game series Squid Game starring Lee Jung-Jae and created by underdog writer-director Hwang Dong-hyuk, but it may as well be. That article is coming later this month, because at this point it basically has to (call me, Netflix). It’s a phenomenon, after all: the cutting social-satire turned bloodthirsty children’s-game marathon is on track to become Netflix’s most watched show ever, which guarantees a pile of copycats are being hastily thrown together as we speak. It makes sense, it’s only human nature.

We’re in the middle of the Murder Game Renaissance. This won’t be the last piece on them this month.

Since we’ve decided that it’s officially Year of the Squid, it’s time we finally give the Murder Game subgenre it’s due. Too small to have its own official genre name (I’m making it up as I go along here, people), ‘Murder Games’ waned in popularity following The Hunger Games phenomenon of the mid 2010’s. It’s difficult to say why. Maybe folks were just oversaturated with it: there was no shortage of extremely-medium Teen Apocalypse Fictions going around. Maybe it had to do with the generation raised on the books-turned-movies growing up a touch and moving on after The Maze Runner failed to scratch the itch. Maybe it was an Executive decision. We’re also not sure if this new, Squid Game-obsessed generation is those older fans back for another turn, new kids(!) discovering the sublime nightmare of the killing game, or some combination of the two. Whatever it is, there’s something incredibly alluring about the format.

Maybe it’s because Murder Games are often vicious criticisms of Capitalism and its offspring, hyper-competitive work culture. Maybe it’s the way they take complex philosophical thought-experiments like utilitarianism, altruism and even basic morality and force us to bear them out in excruciatingly literal fashion. Maybe it’s just because people are ultimately selfish, bloodthirsty animals and something about the thrill of the hunt excites us, even on tv. It could be the way that they‘re basically Reality TV with extreme stakes, complete with all the backstabbing, deceit and strategy.

At least there’s one thing we can count on: it’s always knives out for Capitalism.

It has to be a combination of all those things: ideology, survivalism, the raw thrill of survival outside the boundaries of ‘safe’ society. It’s the same energy that brings the best Horror to life – and make no mistake, Murder Games are a Horror subgenre. Whether intentionally or otherwise, Horror exists to expose our darkest fears and animate them, giving us a space in which to explore frightening or taboo ideas without risk of being, uh, murdered ourselves. In Horror, it’s never just the fear of death working behind the scenes: the nature of the threat tells us a great deal about the culture that produced it. The anxieties and the agenda of the filmmaker always shine through, so Horror is political whether it means to be or not. Whether it’s Battle Royale villainizing the older, institutional generation preying on the young in postwar Japan or Squid Game viciously dissecting debt culture in contemporary Korea (and everywhere else!): a Horror film is never just about scaring an audience. It’s about how you scare them in the first place.

So what scares you, how does it do it, what social norms are we peeling away to expose the core of what frightens us? Is it The Fly and its hapless Jeff Goldblum, watching his body waste away as he transforms? Is it the ‘impossible’ (then suddenly very possible) choices in The Hunger Games? Is it the Kafkaesque, hypnotic echo chamber of something like Jacob’s Ladder or Eraserhead? What are they saying about us? It’s always more than we expect.

Horror is the act of locating our taboos and then diving into them headfirst to understand ourselves in the process (and to freak ourselves out because it’s fun!). The Murder Game just takes that exercise and turns it into a kind of game show. It’s sick by nature, but we eat it up.

Of course we do. So where’s your Murder Game set?

I can’t think of a more lawless wasteland arena than Highschool.

The thing about Hope’s Peak Academy is that you’re never supposed to be there to begin with. This is made clear.

It’s not that you don’t have the grades – grades aren’t really what matters at Hope’s Peak – it’s that everyone else is the ‘Ultimate’ something-or-other. This didn’t make sense until you looked it up online and started creeping the other students: Ultimate Gambler, Ultimate Popstar, Ultimate Fashionista. Ultimate Martial Artist, Ultimate, uh, Fanfic Writer.  The list goes on: one kid’s the Ultimate Clairvoyant. Whether it make sense or not, it’s a who’s-who of brilliant young whatevers, and they’ve all been chosen for Hope’s Peak. To represent the next generation.

You aren’t Ultimate anything. This is likely to become a problem, you think.

And yet there you are at the gates of Hope’s Peak, bag in hand, acceptance letter in hand. What are you the Ultimate at? What do they know that you don’t? Do you belong at Hope’s Peak, and if so, why?

Why does anyone belong anywhere? Your world swirls to a point as you reach out to touch the front gate, and you fall to the ground.

When you awake in the classroom, you meet the other Ultimates. They’re as extreme as you’d expected. You’re an outcast, a thoroughly normal kid swimming in the deep end with the best and brightest young prodigies. Some are kind, in a condescending, sympathetic sort of way. Most are cold and proud. A chipper young woman in a swim-team jacket takes you under her wing. Her name is Aoi Asahina, and she is your first friend. You’re grateful for the warmth of her smile.

Then you notice the steel-covered windows. And the security cameras in the corners of the room, panning to watch your every move. Out in the hall the front door of Hope’s Peak Academy is replaced with a massive vault door, sealed shut with two massive artillery-guns on either side, also panning to watch your every move. The Ultimates are scared now, and murmuring amongst themselves.

In the gynasium, a black and white talking stuffed bear with a child’s voice itself as your teacher, principle, and head of staff.

His name is Monokuma. He welcomes you to the Killing Game.

Danganronpa: Trigger Happy Havoc was released in 2010 for the Sony PSP, then later ported over to PC’s and consoles. It’s a visual novel with real-time puzzle elements and a great deal of socializing meant to replicate the complexity of high-school social life. You’ll spend your time clicking through a book’s worth of text as you develop your relationships with your classmates and wonder the halls of Hope’s Peak, searching in vain for ways out past the sealed windows and laser grids. For the most part you’re left to wander the campus in first-person mode and visit the various amenities, searching out your classmates and getting to know them one-by-one. No one wants to be trapped in the school, and the mystery of how you all ended up sealed with a talking bear in the first place hangs heavy over everyone. With so many different skillsets you’re sure to be able to figure something out between yourselves and find a way out. Preferably without having to play with Monokuma.

That is, until the killing starts.

Monokuma does a pretty good job of going over (and over, and over) the rules, so I’ll summarize here:

As The Ultimate Gambler points out immediately, deadpan into the camera, it’s a prisoner’s dilemma! Safety is assured so long as no one ever wants to leave the academy, or figures they can get away with (literal) murder, or has any ulterior motive for being in the school in the first place. And as we know from Squid Game, no one ever gets greedy.

You can trust your classmates, right?

It’s an absolutely killer premise (pun) and one any Danganronpa fan has breathlessly summarized at parties ad nauseum. It’s a Murder Game set in the already dog-eat-dog world of a highschool filled with entitled, brilliant youths, where the killing is not only optional, it’s secretive by necessity. Every case-downtime-case rhythm will take you hours as you slowly unravel the secrets of Hope’s Peak, or die in the process. As the numbers dwindle and the characters you care about find themselves dead by either each other’s hands or the game’s itself, the tension becomes explosive. Danganronpa isn’t a scary game by any means, but there’s an oppressive stress to Hope’s Peak Academy that can’t be denied.

Danganronpa isn’t difficult and there aren’t any jump-scares or anything, but it’s a Horror game through and through. I recommend it to anyone intrigued by the premise or it’s bonkers art style, which seems to shift from character to character and features bright neon-pink blood. If you can imagine a soundtrack as frenzied and loud as that art style, that’s what you’re in for musically and it’s amazing. Masafumi Takada’s work on this one is wildly unique.

While it’s a classic of the genre, it’s also worth noting that Danganronpa is not a perfect game. There are elements of its writing that could be thrown out or modernized in 2021, particularly in regards to the clumsy handling of Queer themes later on, as well as sexuality in general. I’m not going to make excuses for it: go in expecting a visual novel from 2010 and you’re likely to be well-prepared for its occasional, weird bout of juvenility and insensitivity. The killer premise also isn’t going to be enough for some folks to overlook the general horniness and anime of it all, I can definitely appreciate that. Horror of all kinds has a way of showing its age in the most uncomfortable ways.

That said, if you can look past the flaws there’s a reason these games have such a dedicated fan community, and it goes way beyond the fact that high-school sucks for basically everyone. Danganronpa is a singularly bizarre, charming and disturbed experience – so it was the first thing that came to mind the second I finished Squid Game last week. It’s a dog-eat-dog world out there, and that isn’t changing anytime soon.

With the world as it is, I imagine the Murder Game Renaissance is here to stay.

One thought on “Murder Games are Back and Squid Game is Over: Now Play Danganronpa”