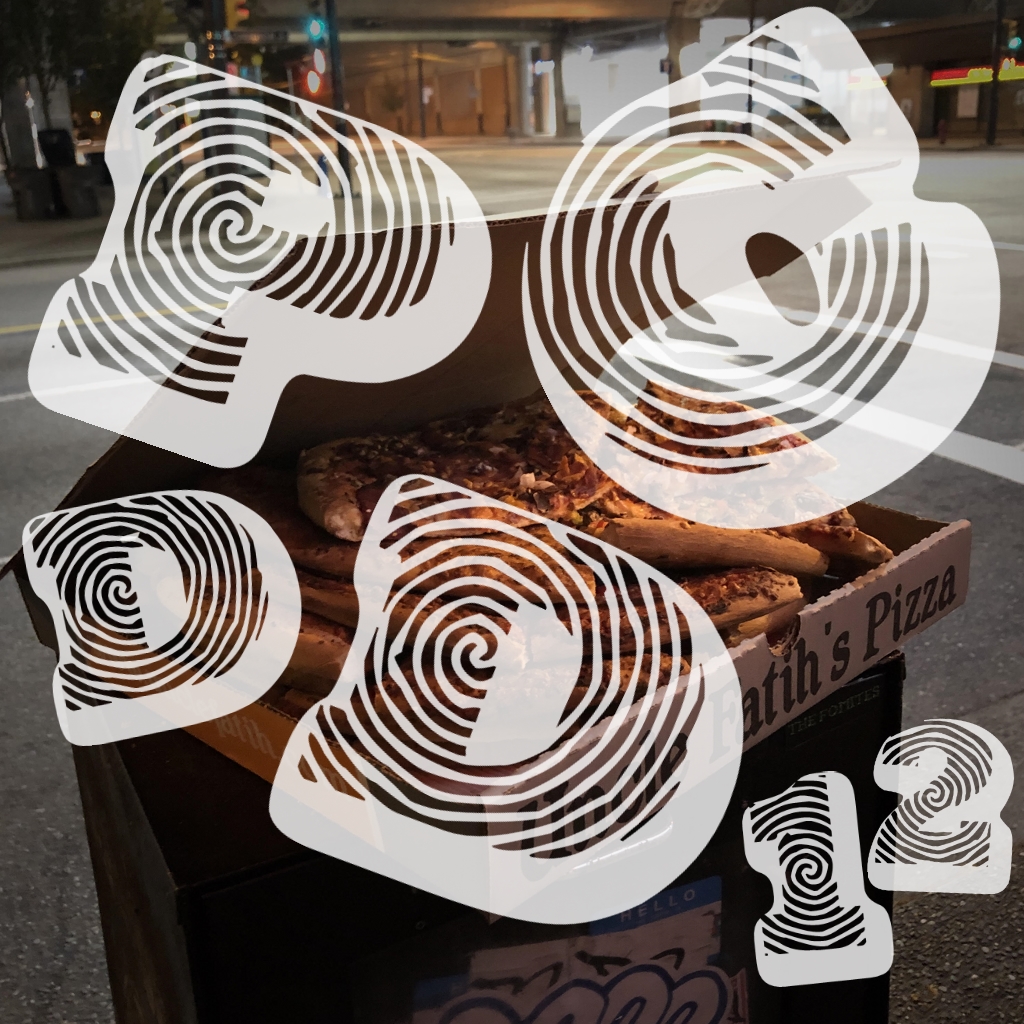 One night at about 4am, I happened across the motherlode of all pizza drops. I’d seen a pizza trove before (who hasn’t?), but this was different. There must have been 30 slices in that soggy box, all stacked at random like they’d fallen from heaven. Which they had. That’s it in the feature image, it was unattended and it smelled amazing.

It was incredible. In that moment, I was King Rat.

My willpower was being tested.

I didn’t take the mystery slices because I didn’t need them, they weren’t for me. I took pictures instead. But if I had lugged that entire, perfect pizza mountain home, I would have wanted to soundtrack that adventure with the greasiest Hallowe’en rock I could find, really deep-fried junk-food level stuff. So, Psychobilly. It would have to be Psychobilly: the Pizza Mountain of the musical world.

I was thinking about Pizza Mountain today and what it meant to me. So, I made that soundtrack for you to celebrate the end of the first week of Hallowe’en. Enjoy! Maybe take some Pepto first, to be sure.

Fun fact about me: I went through an intense Psychobilly phase in my university days. My dream at the time was the host a Psychobilly radio show on college radio, so I stockpiled all the goofiest novelty stuff I could find. I pored through the radio-station stacks and dug out questionable Canadian compilations, I scoured the internet for groups from Japan, South America and – of course – all over Europe. I bought stacks of warped vinyl second-hand, just to own anything I could get my hands on.

If it had a skeleton on the cover and someone was playing standup bass poorly, I was into it.

It helps that it’s Spooky music, so as an original Hallowe’en Child it’s a natural fit. More than that though, Psychobilly is kitschy. Like the modernized, costumed version of Hallowe’en, it’s deliberately artificial! It’s fake as hell and I love it.

This might not seem like the case at first: basically all of these bands are playing in the American rockabilly tradition. They openly worship the Stray Cats (New York) and The Cramps (also New York), on top of the whole Telecaster-blues tradition. Maybe the biggest band still practicing the genre is The Reverend Horton Heat from Dallas, who coined the term ‘Psychobilly’ without ever wanting to take part in the genre. They ended up the mascot for it anyways. And of course we can’t forget Screamin’ Jay Hawkins. Ever.

But none of those groups call themselves Psychobilly because they kind of aren’t (even if the sound is there). So who did?

Psychobillies are almost all from Europe, playing in the American Blues tradition, but with none of the cultural background. So they, um, substituted skeletons and zombies and fused with the Surf Rock and U.K. Punk communities in one of history’s great Lowbrow mergers. The results speak for themselves.

Here’s some examples: The Meteors are from South London. Demented Are Go – Welsh. Nekromantix? Copenhagen, Denmark. Mad Sin: Germany. Batmobile are from Rotterdam. Krewmen, Coffin Nails, Guana Batz, Polecats, Klingonz and about a hundred more or all from all over the UK. The Long Tall Texans are from… Bristol.

Of course they are. It turns out all sorts of interesting places are making extremely American-style rock about zombies. There’s a whole international Camp community out there.

Canada has a respectable Psychobilly community (Creepshow, Big Jon Bates, Matadors and more). Battle of Ninjamanz, at track 12 on the playlist, are from Japan. The literally-unprecedented Los Saicos – who might be the world’s first Punk band – are from Lima and formed in 1964. The list goes on and on.

I can go on about this forever. The point is that Psychobilly, at its core, is a goofy, campy subgenre to the core, and that energy perfectly reflects everything I love about Hallowe’en in the first place. Nearly nothing on this list is newer than 1990, so perhaps next time we’ll be due for some modern Psychobilly. Things get weird fast.

Anyways, it felt like a natural fit for a Spooky Season party. Now go treat yourself to a pizza.

Oh, and if it sounds like an hour of the Johnny Bravo theme, it’s only because that was the Reverend Horton Heat himself.