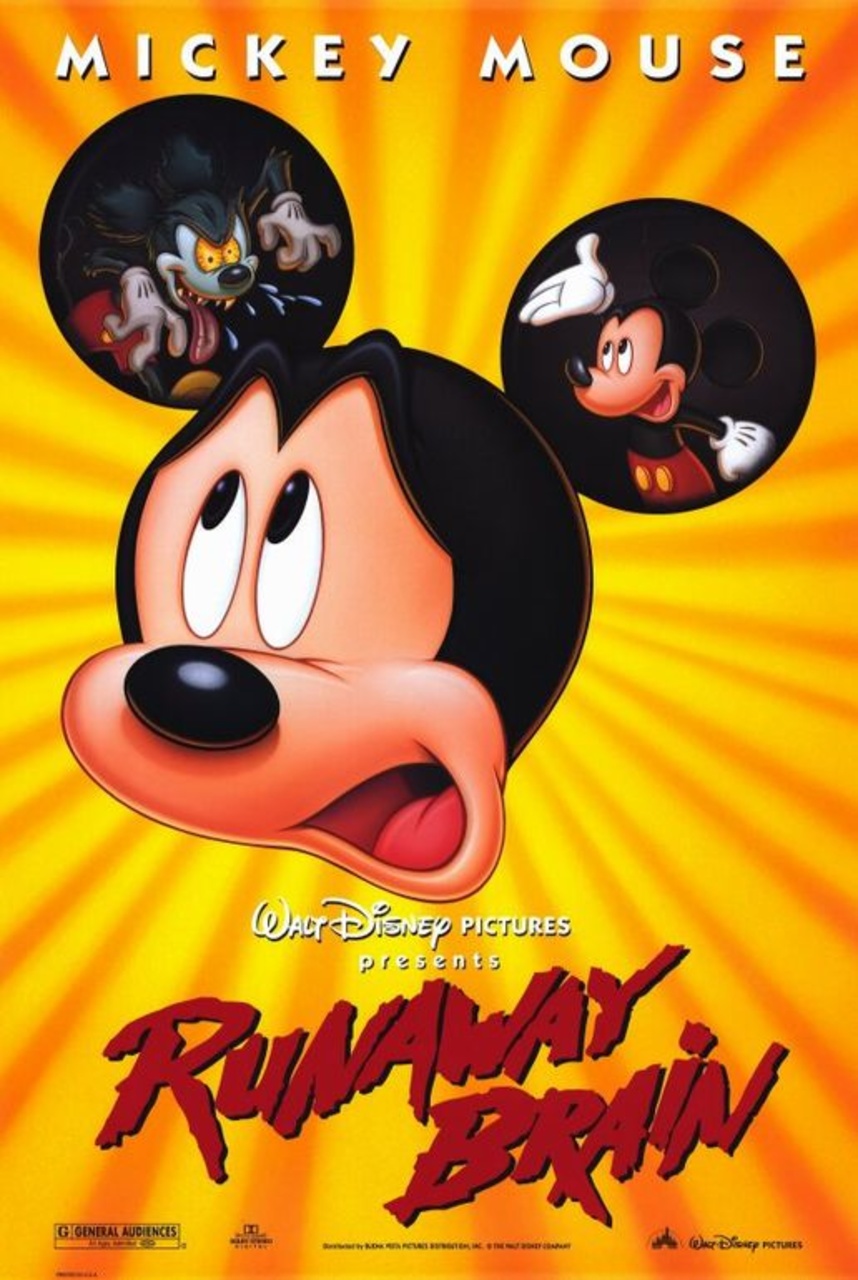 Credit where it’s due, I had completely forgotten about Runaway Brain until I read this excellent and exhaustingly-researched Polygon article on Thursday. Normally I’d do a bit of a historical rundown for a banned-ish piece of media like this because I find those kinds of stories fascinating, but Drew Taylor totally swooped in and did the hard part for me. So now I don’t have to.

Runaway Brain is one of those things that goes by on Twitter and feels perfectly designed for clickbait: the great lost Disney cartoon, locked forever in the Disney vault in Walt’s secret, illicit stash. What horrible secrets could it contain? It briefly goes viral, people (especially animators!) kind of lose their minds that Disney soft-banned a cartoon that was literally nominated for an Oscar – which it lost to Wallace and Gromit – and then it recedes from our collective memory until the next time an intrepid internet explorer drops it in our laps. There are a number of comics, cartoons and games just like it: weird enough to be distinct and compelling, but just far enough off-brand that their publishers push them to the side in favor of more easily marketable stuff.

It’s where the Garfield nightmare strips live, along with that one messed-up episode of Reboot and basically the entirety of Courage the Cowardly Dog: it’s genuine, children’s strength Horror.

But this is 1995 Disney we’re talking about, and 1995 Disney didn’t do that. Except for the one time they did.

Runaway Brain is a genuine Gothic Horror, if you can believe it. It’s a loose retelling of Frankenstein that casts Mickey as a kind of absentee boyfriend with more interest in his Snow White fighting game – which he’s losing horribly – to his girlfriend Minnie. When she comes home and points out that he’s forgotten their anniversary, he panics and accidentally promises to take her to Hawai’i on vacation. From then on, it’s up to Mickey to raise almost a thousand bucks as quickly as possible, which he decides to do by replying to the world’s sketchiest wanted ad. Like he tells his dog Pluto, “You need moolah to hula, boy.”

In the background, a monochrome painting of a piece of cheese in a mouse-trap reads ‘Just Say No.’

Moments later, following a frame-perfect Exorcist homage, Mickey is strapped to an electric chair while a ghoulish monkey-doctor straps electrodes to his brain. Cackling outrageously, because he’s played by real-life villain Kelsey Grammar, he links Mickey’s brain to a giant monstrosity named Julius (Big Pete, of course). We’re never told whether Mickey screams in surprise or agony, but the ensuing zap trades his mind for the beast’s. When the smoke clears, Mickey is a hulking, growling Frankenstein monster, and his old body has been possessed by the drooling, fang-toothed Julius. The doctor is vaporized in the blast; his bones topple to the floor. When Julius reaches into his/Mickey’s wallet and sees Minnie gazing back adoringly, he becomes obsessed and crawls howling out the new hole in the roof.

Meanwhile, Minnie shops for a bathing suit at a place downtown called The Wet Rat.

The hunt is on.

Runaway Brain is only seven minutes long, but by the 3-minute mark Mickey has made a deal with the devil, a monkey-man is dead and his girlfriend is being pursued by a perverse monstrosity wearing his body as a disguise. By the end Mickey will be fighting for both of their lives.

If that isn’t a Victorian Gothic, I don’t know what is.

While it might read like a gritty reboot for the House of Mouse, in execution it’s peak Disney. It’s easy to forget, in the era of CG, that Disney used to make cartoons that looked like this. Every motion is perfectly exaggerated – take the opening scene where a dead-eyed Mickey gazes hypnotized into his video game, or the way Julius-Mickey cascades through every scene smashing through windows and doors. It recalls an era of 2D Disney animation that feels alien if you didn’t grow up on it, and painfully nostalgic if you did. Every motion is bouncy and lovable slapstick comedy. It’s perfectly 90’s, right down to the colour palette. That’s without getting into the writing, which even by today’s standards I’m kind of amazed they got away with.

I’m amazed they got away with any part of Runaway Brain. I, too, would like to go shopping at The Wet Rat.

This isn’t to say that Mickey has ever been a stranger to completely out-there material. In a sense, Runaway Brain was a return to form to a much, much earlier style of animation: the similarly Gothic and haunted Mickey cartoons of the 20’s and 30’s. This was back when Mickey was just one of many mascot animals, all with their own little shorts (and all of which share the extremely dubious, unavoidable history of talking animal cartoons). Here’s Mickey dodging much worse things than Dr. Kelsey Grammar, circa 1929:

And here he is again saving Pluto from the ambiguously-European (but definitely evil!) Mad Doctor in 1933:

By comparison to those two, Runaway Brain is positively toothless (unlike Julius). And while 1995’s Oscar nomination committee agreed, Disney itself must have felt the cartoon was just a bit too far afield for the image they were trying to cultivate at the time. So off to the vault Julius went, only to be resurrected in Epic Mickey and Kingdom Hearts homages. I haven’t fought Julius in Dream Drop Distance, but I’d like to.

So it goes, Gothic Possessed Mickey.

In recent years Disney seems to have changed its tune again with the Paul Rudish series, meaning there still might be hope for Weird Mickey in the future, one that isn’t afraid to go completely bizarre around the spooky season. I certainly hope so we get more like this October short from 2013:

Nowadays we’re spoiled for amazing animated shows that get to go all sorts of wild places, many of them published by Disney itself. For every Gravity Falls or Owl House, though, there’s a Runaway Brain: somebody’s completely out-there concept that, while brilliant in its own way, managed to get itself swept under the spooky rug of history.

So back to the clickbait thing: what doesn’t Walt Disney want us to know about Runaway Brain?

Well, probably that it’s excellent. Now if only there were a place you could watch it after a couple ads.

Turns out that it’s surprisingly difficult to source half-decent images for banned Disney stuff! A major shout-out to the Disney Fandom Wiki for the screenshots on this one. It’s as obsessively-researched a database as you’ll ever find on anything.