In His Darkest Hour, Garfield Is Utterly Alone 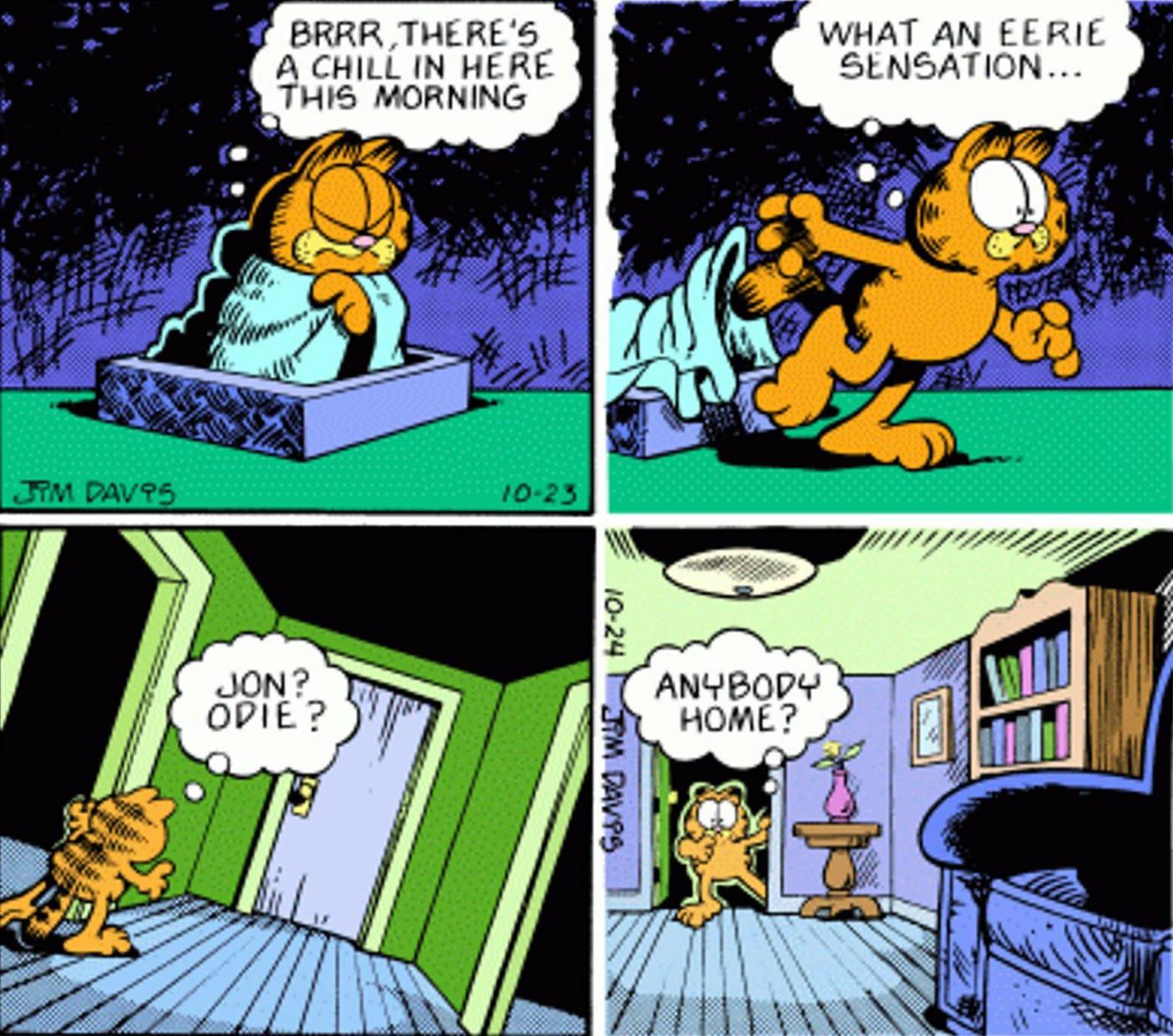 “During a writing session for Halloween, I got the idea for this decidedly different series of strips. I wanted to scare people. And what do people fear most? Why, being alone.” – Jim Davis, Master of Horror

Whether we admit it to ourselves or not, we fear being alone. This isn’t the same as saying we all fear solitude, or fear the experience of loneliness for its own sake. Solitude and loneliness are two sides of the same, temporary coin – they’re states that we pass in and out of, we learn and grow from them. They’re positive. Whether we’re scared of loneliness or not, it’s an experience in its own right, even if it’s rarely a fun one. The fear of being truly, cosmically alone is different. It’s an ancient dread rooted in a far deeper, more primordial terror: the fear of death.

To be truly alone is to be existentially alone.

We’re hard-wired with a fear of no longer being able to participate in our lives, of being surrounded by the unfamiliar and unable to relate those experiences to others. We can’t build knowledge about death because we can’t share it: we know death only by what it isn’t. So whether it’s truly the experience of death that we fear – or just our lack of knowledge about it – doesn’t really matter. Death is the core of many of our other fears at once: it’s not just the fear of the unknown, it’s fear of the unknowable.

Cosmic Horror is built on this exact kind of dread. It throws unknowable, unimaginable concepts at the audience as proxies for the Big Unknowable Thing we’re all so worried about already. Fear of ‘Being Alone’ is just the way we’ve worked out how to process it.

Now normally, Jim Davis is not the guy I would count on to inspire this kind of discussion. But hey, this column has covered the horrors of Mickey Mouse, Calvin and Hobbes, Disneyland and Highschool. So you know what, fuck it: let’s over-read Garfield and do the scariest run of family comics to ever appear in syndication.

Let’s handle our fear of death with Garfield the Lasagna Cat.

Garfield hates Mondays: we must imagine the following actual Garfield strips from October 23rd, 1989 onward all take place on a Monday. Either that or he’s in there for a week, which is chilling in its own way.

So that’s the full run of Garfield, the world’s favourite cat, living out an episode of Black Mirror in-canon. If that was too small or bootlegged to read, this is its official, legal home, where Mr. Davis proudly tells the world this Creepypasta is something he wrote and thinks is okay to show people. You can buy prints of this memento mori if you feel that’s something you need in your life, or in the life of a loved one. It would make a great gift (for me).

Poor, solipsistic Garfield. It really puts the rest of Garfield in perspective if you always keep in mind that this is a real thing he went through in the 80’s, huh? It’s an absolutely remarkable Horror one-shot, and it rivals anything I’ve read for its brevity and punch. Maybe it’s just because of the incredible heel-turn of Jim Davis turning his Sunday funny into an episode of The Twilight Zone with zero warning, but who can say. Jim Davis bats in Ito and Nakayama’s league for exactly one week, then goes back to obnoxiously normal the very next morning. He didn’t even end his little experiment on Hallowe’en.

Truly, it’s the work of a Horror master.

I encountered these comics as a kid in one of the print editions circa ’98 and thought I’d lost my damn mind. I can’t imagine reading Garfield at the time and ever quite trusting Jim Davis again. Thanks, Scholastic.

So why does the Garfield Hallowe’en special work so well? It’s the sense of isolation, and the way it threatens everything we passively accept about Garfield and newspaper-grade cartooning in general.

Put aside for the sec that this is Garfield – if that’s even possible – and check out those first three days of strips. There’s no setup and no secondary characters. In a comic that usually relies on the strictest possible gag-punchline format, there aren’t even any jokes – it’s just 9 straight panels of Garfield wandering lost and alone, at odd angles and in Noir lighting, growing increasingly more panicked. Then, at the end of panel 9, we get our first ‘punchline’: this is Garfield’s house alright, but something’s gone horribly wrong. It’s unattended, run-down, and worst of all, it’s for sale.

Wherever Jon and Odie are, they’ve been gone for a very long time. It’s a betrayal of Garfield‘s tone and format in every way. Then we get the actual betrayal.

Garfield, realizing he’s in the ruined shell of his own home, finds a picture of himself, Jon and Odie on the floor. Is he dead? Are Jon and Odie? We’re never told and given no time to think about it – Garfield hears something from the kitchen! He rushes in to find Jon, Odie and a warm bowl of food!

Then, in a three-panel run most Horror comics can only dream of nailing, Jon and Odie… disappear. They were dreams, or hallucinations. Or memories. The kitchen is empty. Even as an adult, those panels hurt to read.

Then, the first and only narrator in Garfield history kicks in:

Locked fast within a time when he no longer exists, Garfield grapples with his greatest fear… Loneliness.

After years of taking life for granted, Garfield is shaken by a horrifying vision of the inevitable process called “Time.” He has only one weapon:

Garfield has come face to face with his fear of death, and chooses to forget.

With a snap, Garfield’s world returns because he’s willed it to return. The voice hints that this is the power of Garfield‘s imagination, and that he’s learned a Christmas Carol-style cautionary lesson about valuing his family – but it never denies that the nightmare occurred. Accidentally or not, the strip refuses to draw a line between reality and fantasy.

Most chilling of all, it’s strongly implied that Garfield, America’s favourite lasagna-loving cat, is still in that horrible, empty future imagining his happy life from then on. Worse, maybe he always was. What does that say about us?

This is shockingly high-minded stuff for a Garfield cartoon, and of course I’m reading way too far into it because I’m supposed to. It’s a remarkably successful horror strip by a guy who admitted he was trying to freak his audience out! Jim Davis clearly succeeded at what he set out to do, which was drop a week’s worth of Hallowe’en strips that have had people talking about for over thirty years since. I’m not sure he intended to get a generation of young readers prematurely thinking about the concepts of death and isolation, but he managed to pull that off too.

There was also one more accidental ripple-effect to his little Hallowe’en prank: the creation of an all-timer Creepypasta format.

We love to build ghost stories into innocuous pieces of media because, like FanFiction, it gives writers a way to couch their story inside of a prebuilt universe. It spares a storyteller the heavy-lifting of worldbuilding and lets them get down to what they do best, which is injecting new or novel perspectives into that world. If that world is at odds with the genre of the story, all the better! Who isn’t intrigued by the concept of spooky secrets hidden in Rugrats or the tale of the fucked-up Majora’s Mask cartridge? It marries the frightening content to the ‘safe’ in a super-compelling, accessible format. Jim Davis just happened to figure it out about a decade and a half before anyone else and corrupt his own strip as a test subject.

Where Davis backed away, others have only leaned in, resulting the phenomenon of truly upsetting Garfield horror art that’s been sweeping across the internet over the last few years. If that’s something you need to know more about, you can check out that out:

Jim Davis is, uh, an influential Horror cartoonist and his Garfield is a comic strip that addressed the fear of death in a thoughtful, completely skin-crawling way at least once during its 43+ year run. It’s unlikely Jim Davis will ever return to this supremely bizarre little footnote in the history of his orange cat, but hey, Garfield still runs daily and worldwide. There’s always tomorrow.

One thought on “In His Darkest Hour, Garfield Is Utterly Alone”