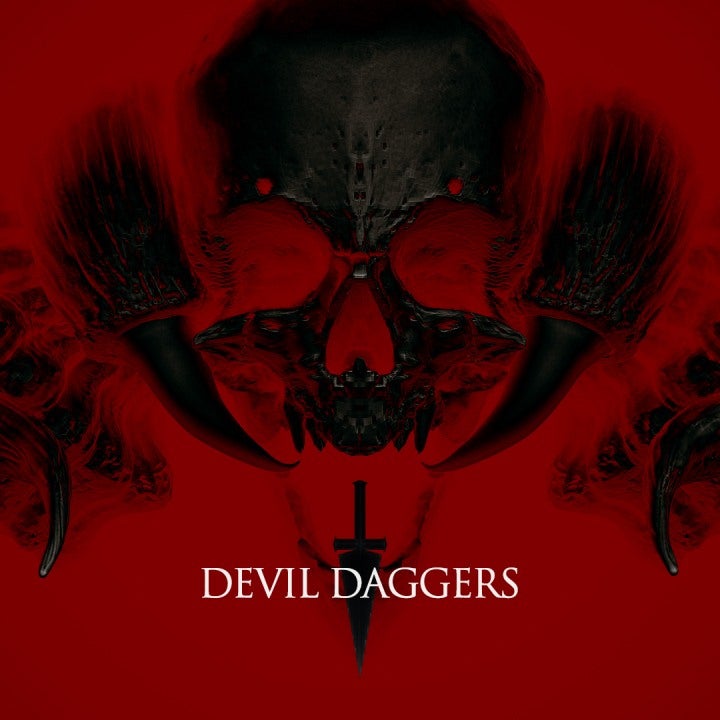 The killer is always right behind you.

You can hear it, it sounds like the rattling and clattering of stained bones picked clean. You hop forward and sideways, hoping to gain a little speed and throw them off, but they’re fast. They’re gaining on you. You pick up something else now, a kind of hard scrabbling sound in the distance. The noise is like a wave cresting at your heels – you want to look back but there’s no time. The room is pitch black, the only light throbs up from the center of your platform and the fire in your right hand. You don’t stop running long enough to think about it.

Then, at the edge of your vision, something massive looms up from below. It’s shaped like a huge, inverted tick. It has too many legs and makes a sound you haven’t heard before. You blink in surprise. The bones catch up with you.

There, I’ve just described the entirety of Devil Daggers.

There’s an amazing movement in indie gaming right now centered on the idea of replicating imaginary classic-era Horror titles. There are dozens of these little games, fronted and curated by accounts like Haunted PS1 and their digital festival EEK3 (it just happened!). Their design philosophy revolves around a combination of nostalgia, aesthetic and the uncanny gaps that can form between the two. There was something undeniably creepy about the limited graphical output of the PlayStation era that resulted in true Horror classics like the survival-horror-defining Resident Evil games, Silent Hill and FromSoftware’s lonely, strange Kings Field titles. Haunted PSX and their many, many collaborators dare to ask: what if we could climb in a time machine and apply everything we know about modern Horror and game design to the jagged polygons and bit-crunched soundtracks of yore?

What would that look like, sound like? How would it feel, and how faithfully could they replicate the uncanny low-if scares of yore? Even more excitingly, how could they bend those classic formats into strange new shapes?

Playing these games often feels like a trip to a gallery showing by a weirdo local artist. Everything is just abstract enough to feel alive. At their best, these games feel completely haunted, like the film-grainy throwback Slashers that have become so popular on services like Shudder. They’re the video game equivalent of challenging, art-house cinema.

Devil Daggers, by indie dev team SORATH, is one of these. Or it would be, if it weren’t a touch too old. Released in 2016 for the PC, it anticipates the PSX throwback movement perfectly: there are jagged polygons, jagged sounds, extremely direct game design and big, loud creatures straight out of Quake. But, like the indie title it is, there are also online leaderboards and a totally addictive scoring and replay system. Load times are instantaneous, the audio is three-dimensional and uncomfortably detailed, and the movement is taut as a bow-string and tuned to perfection. There is also a single Steam achievement that you will never, ever conquer.

But once you’re inside it, none of that matters. Nothing matters, in fact. There is only the second-by-second fight for survival.

Which you will lose. My personal record is eighty seconds.

Devil Daggers opens to a black room with a floating, orange dagger. Other than the dagger, the only things you can see are the light it casts on the tiled floor and your outstretched hand, beckoning towards the blade. It’s at this point that you’ll make your only real decision: touch the blade and the lights go up on the wide, broad platform where you’ll spend all your time – the sound of approaching threats begins in the distance. Or, uninstall the game. It’s very small. You’ll be back.

Gameplay-wise, it might be easier to describe Devil Daggers in terms of what it lacks. There are no:

In fact – beyond the taking of the dagger – the only decision you’ll be making in your time with Devil Daggers is whether to shoot or run, and the answer will always be “both.” Tapping your mouse triggers a shotgun-style blast and holding it down fires a stream of… daggers? Shells? It isn’t entirely clear. Nothing about this game is ever entirely clear. Enemies will loom into the distance and pour onto your platform in waves that are dictated by two things: how many you can defeat, and how long you can last. Every second of gameplay – and it is measured by the second – is dictated by whatever fresh nightmare shudders itself onto the platform, and whatever way you’re going to deal with it. If anything touches you, that’s it. If you fall off the platform, that’s it.

If you ever stop moving or shooting, you’re done.

Thankfully load-times are instantaneous and gameplay is lightning-fast. I made about 50 consecutive runs while preparing for this review. They took me about 20 minutes, and I’m going to go straight back to it when I’m done. While you might not die as fast as me, you’re never quite as quick as the creatures on your heels. Thankfully you have one big advantage that they don’t: your ears.

Because the game is dark and your field of vision is limited, you’ll be relying on your sense of sound a lot. Audio design in Devil Daggers is singularly excellent: everything makes its own distinct noise, whether at a distance or close-up. Once you get the hang of it, you can identify a threat anywhere in your periphery without needing to see it, which is great because you’re going to need to spin and strafe constantly. High-level play of this game is a dazzling combination of FPS skill and intuition as players weave between massive, never-ending torrents of horrors. There are bosses waiting below, beyond skill thresholds I can barely imagine. Enemies don’t have a ton of health, but they really don’t need to; they’re infinite. While the game itself isn’t random at all (waves are predetermined!), I could never shake the sense of awe and terror when something new and awful floated into my vision.

Speaking of sound and motion, the soundtrack is incredible. It channels the lost NiN Quake soundtrack, which makes sense because every part of this game feels like Quake worship – but only its most dangerous, terrifying moments. Devil Daggers is the thrill of the hunt and the chase at once, with every other element excised. To play this game is to have your pulse race and your jaw set every second, because every second matters. Making it past a minute of gameplay is impressive. Anything beyond that is a Herculean effort. The game has no ending and no goal, beyond survival and the scoreboard. The sense of urgency combined with its total minimalism and grainy, menacing art style makes Devil Daggers one of the purest adrenaline hits in years.

So pick it up right now and try a run or two-hundred. It’s the most concentrated dose of nostalgic first-person terror you’ll ever die to, and you can do ten runs in a minute. It might not be an rhythm game, but you’re still an instrument.

Final screenshot unapologetically stolen from the Devil Daggers Steam page because I’ve never survived long enough to even meet whatever that thing is. Sheesh!